LOOKING down from the balcony of my 13th-floor hotel room, I can see a green and purple carpet of blossoming trees spread out across Buenos Aires’ beautiful Rodriguez Pena Square.The black-and-yellow taxis cruising along the six-lane boulevard below remind me of shiny beetles crawling in a line and the pedestrians are no bigger than scurrying mites.

Stretching off into the distance, the thousands of buildings which form the city’s skyline merge into a jumble of grey and brown.

I am trying to take in the magnificence and scale of Argentina’s energetic capital city from the luxury of the five-star Palladio Hotel on a balmy evening.

The panoramic view alone tells you the way of life is as full-blooded as the generous glass of Malbec I have poured to help me catch the mood.

Now locals – nicknamed Porteños after the city’s port role – are looking to share their vibrant and stylish home with new friends from abroad.

“Somos Porteños” (we are from Buenos Aires)

It is a city of balconies, squares, building , domes and fountains, and streets decorated liberally with statues and monuments to its heroes and heroines.

High on the sightseeing list should be Casa Rosada, the pink-washed neoclassical mansion which houses the President’s office.

Set in the spectacular Plaza de Mayo, it was from here that the glamorous Eva became Argentina’s spiritual leader after marrying President Juan Perón in the 1940s.

Shortly before her death from cancer, aged just 33, the former singer made that landmark speech from its balcony to an adoring crowd below.

And it was from the very same balcony that Madonna in the role of Eva, sang “Don’t Cry for Me Argentina” in the 1996 movie, to some 4,000 extras playing her supporters.

The former First Lady is buried with her paternal family, Duarte, at Recoleta cemetery.

Alongside other huge ornate mausoleums, the Duarte tomb is draped in flowers and rosary beads and reinforced against the attentions of grave robbers making this awe-inspiring city of the dead one of the Buenos Aires’ top tourist attractions.

Other architectural gems include Obelisk, a white stone needle rising more than 230ft out of the Plaza de la Republica.

Up there – literally – with Obelisco is Palacio Barolo, a 22-storey office block which blends Gothic, Art Nouveau and Art Deco, and was once tallest building in South America.

So passionate are the Portenos’ for exquisite buildings, they could not resist turning a humble bookshop into a thing of architectural wonderment.

Situated within a frescoed-ceilinged former theatre, El Ateneo Grand Splendid, it was this year named the most beautiful bookstore in the world by National Geographic.

You can also explore the city’s artistic roots at either the Museum of Modern Art or Recoleta Cultural Centre, or see a band at trendy open air venue Ciudad Cultural Konex.

In the city that is the birthplace of arguably the most passionate of dances, tango is everywhere from couples in spangly outfits entwined on street corners and in cafes to performances in traditional milonga bars.And for those who want to get personally Tangoed, lessons are available.

For a different celebration of artistry, you can head to La Bombanera, the cauldron-like home of football giants Boca Juniors, and take a stadium tour.

His favourite son, Maradona, is infamous among English fans for his “hand of God” goal which helped eliminate us from the 1986 World Cup.

But Boca fans idolize him, because he began and ended his glittering career with them and still has a favourite seat in the stand.

His image is everywhere both inside the stadium and outside, in some of the brightly colored murals for which the district of La Boca is known for.

Argentinians are a carnivorous lot who take their beef seriously – as a vegetarian/pescatarian traveller the prospect of eating out was intriguing to say the least.

We started in the hip Palermo district, home to two fantastic traditional grills: La Cabrera and La Carniceria which served everything meaty from megasteaks to sweetmeats.Pointing up at the carcasses hanging up behind the open grill, one of my local dining companions joked: “You are in the wrong place my friend.”

But to my relief he was wrong.Even dedicated steakhouses or grills, offered fish or veggie options, including my unrivalled favourite, provocleta – a delicious chunk of spiced and grilled cheese.

It is all very affordable, too.Gran Paraiso in La Boca offered provocleta classica, with oregano and pepper, for just $3.50, tomato salad for $2.46 and a bottle of local beer Quilmes for $1.94.

Portenos say there are more pizzerias in Buenos Aires than steakhouses, and if Pizza Guerin, which I sampled, sets the bar, then it as high as Obelisco itself.

Narda Lepes, a top celebrity chef on Argentinian television, has ventured even further from tradition at her restaurant Narda Comedor, a new eaterie focussing on healthy, plant-based food.

The 48-year-old gutsy still serves meat but wanting diners to be less meaty has come up with tasty alternatives Bibimpap, a spicy Korean rice dish and ginger and chilli-flavoured “Tofu Trash”.

Despite its quality, prices at her light, airy premises are low.Anything off the light bites menu will set you back about $6.50 and a bottle of Patagonian beer $2.

At Mishiguine which means ‘Crazy’ in Yiddish, chef Tomas Kalika serves Jewish cuisine with a twist in a dark, atmospheric setting with varnished wooden walls filled with book cases, wine racks and old photographs.We were treated to a hand-picked spread of delicious small plates including beetroot soup, roast cauliflower and stuffed egg plant.

Should you have the energy for clubbing after your evening meal, Buenos Aires has an abundance of bars, lounges, tango venues and discos that are open until first light.

The Pony Line lounge at the Four Seasons hotel is rated for cocktails (from $5), while the Sky Trade Bar gives you a panoramic night view from 20 storeys up.

If you fancy sampling some of Argentina’s fine reds and whites you can even sign up for a wine-tasting course run by British expat Sorrel Moseley-Williams.

Buenos Aires’ size, it’s the largest city in the country, makes it difficult to get round on foot, but thankfully the metro, the brightly-painted buses and the cabs are all cheap and reliable.

Hotels are also well-priced for the quality offered.Our base, the Palladio has a spa and heated swimming pool but it was the little touches – like marble bathrooms and strawberries and honey at the breakfast buffet that make the difference.

Best of all, many of the 113 rooms have a private balcony from where you can look out across the city but if you’re tempted to have your own Evita moment, make sure you keep your voice down! 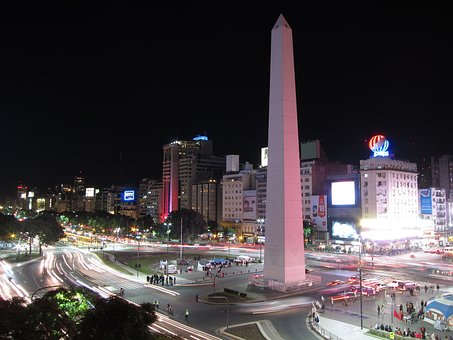